The Renaissance Ball at the V&A

I adore the V&A Museum here in London.  It's everything a museum should be - it has fascinating, intelligently curated collections; it makes an effort to attract people right across the social spectrum; it has free admission, (always amazes the tourists, that one!) and it's open 7 days a week.

On the last Friday of every month the museum has a themed, late night event.  The theme always coincides with an ongoing exhibition or collection at the Museum.  Last Friday the museum held a Renaissance Ball to celebrate the opening of it's awe inspiring Medieval and Renaissance Galleries.  I love the V&A Lates so I dragged my lovely friends T.D., J.C and J.C.'s boyfriend along.
Wow, what an incredible evening!  I was wearing a nice pair of black trousers and a blue jumper but next to these amazing people, I was horribly underdressed.
These are some of the guests... 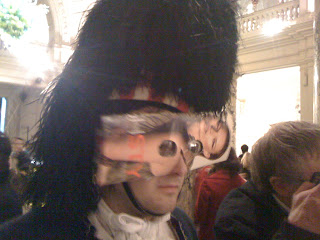 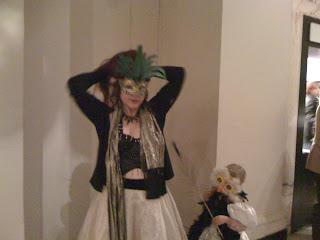 This child was enchanting.  She was telling her mother off here because she was worried she'd miss the puppet show. 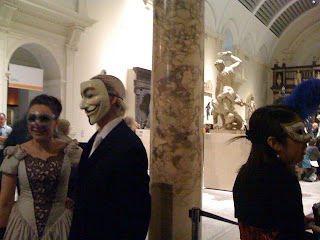 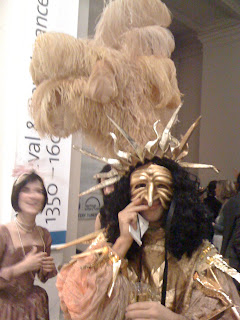 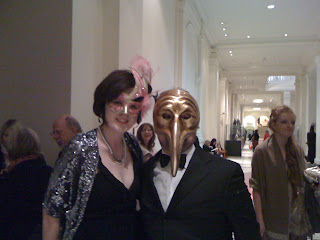 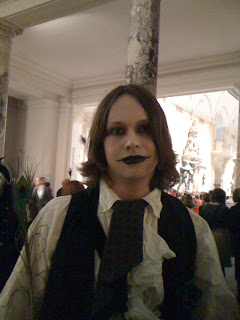 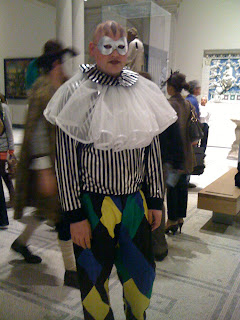 Naturally, there was a bar. 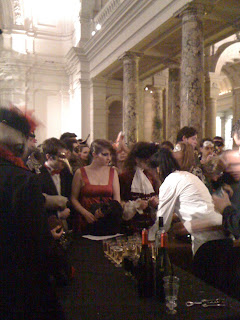 The whole museum is open on these evenings so that people can go and view all the collections.  You used to be able to take a glass of wine with you and walk around the museum but sadly they've stopped that. 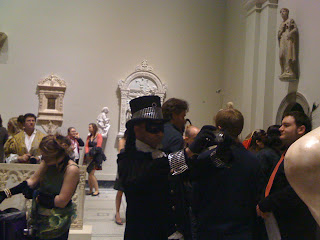 As you wander around the place, you come across events like this puppet show. 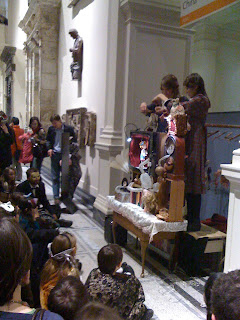 Towards the end of the evening the DJ started playing waltzes - it thrills me just to write that sentence - and the whole crowd started waltzing.  All very 'Eyes Wide Shut'.  I did take some photos but they weren't very good because I was quite drunk by that stage.
Posted by Beautiful Things - Cathy at 14:28 1 comment:

I honestly can't say how I felt the job interview went yesterday.


There were twenty of us being interviewed at the same time.   They kept us waiting in the lobby for ages.  I'm pretty certain I saw a guy in the group who'd been in some kids programme on TV.   I couldn't decide whether that made me feel better or worse.


Eventually we were all herded into a meeting room and spoken at about The Company whilst we filled in an overly long and unnecessary form.  Then we had to do a rather strange test which involved rewriting and typing a letter. Finally we had a three minute, one - to - one interview which consisted of the interviewer looking at you intently for a while then going, 'Sell yourself to me'.  I'm not sure if my contribution of 'Er... um.. I love talking to people', really cut the mustard.


A lot of jumping through hoops for a minimum wage job.

Posted by Beautiful Things - Cathy at 10:22 No comments:

I have a job interview today.  It's for a job in a call centre.


Two years ago, I wouldn't have even considered a job like this but today I'm absurdly nervous that I won't get the job.


Two years ago, I was buying designer clothes without a thought but today I'm carefully budgeting my money, anxious about where the next meal's coming from.

Today, I want to share with you some things I love. 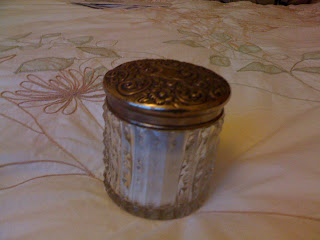 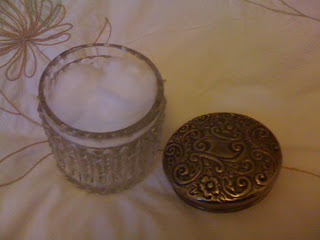 This little glass jar used to belong to my paternal grandmother. She used to keep cotton wool for removing make-up in it and I do the same thing today.  I just love the delicate silver lid and the intricate glass work.
I had a turbulent relationship with my mother so, throughout my childhood and teenage years, my gran was my rock. She was a wonderful person who taught me what being a real woman means - appreciating and loving your family & friends; being intelligent & thoughtful; standing up for yourself but also appreciating other people's point of view and treating very single person you meet with respect & dignity, no matter what their station in life.  She was an amazing artist who took me to art galleries when I was still in primary school and taught me to appreciate art and beautiful things.  I loved her very much and I still miss her.
The second thing I'd like to show you is this gorgeous necklace. 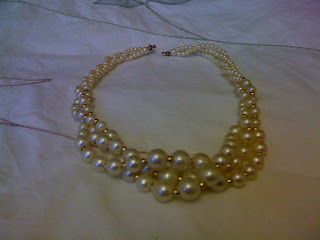 This used to belong to my mother.  As I mentioned previously, I had a difficult relationship with my mum. Sadly, she had personal demons that she never quite managed to conquer.  When I look at this necklace, it reminds me that, in spite of the cruel words, she had a human side that loved beauty and it's this that allows me to connect to her and understand the unhappy person underneath.
Posted by Beautiful Things - Cathy at 17:44 No comments:

Picture from the mirror.co.uk

As the uproar over actress, Hannah Waterman's dramatic weight loss continues, I'm reminded of a story my father told me...

During the late 60's, a friend of my dad's was an Aid Worker in Biafra (now part of Nigeria).  He was starting to feel the effects of too much food and not enough exercise, so, like many people in the same position, decided to go for a jog along the roads around the local area.  After a while, he was joined by a local villager cycling along side him.

'Sir, are you ok?' the Villager asked anxiously.

'Sir, if you are in trouble, please tell me and I may be able to do something.  I have a bicycle and I can cycle very quickly to fetch help.'

The Villager stared at him uncomprehending and continued to cycle along side him for the rest of his jog, anxiously offering help from time to time.

You see, the Villager's life was so tough and he had to work so hard physically that running was something that he only did in an extreme emergency.  As for excess weight, in the eyes of the Villager, that was a good thing.  It meant that you were healthy & wealthy and that you had reserves for the times when food was scarce.

I find it bizarre that in our plentiful abundant society, women (and it's often the wealthiest women) have chosen to deprive themselves of food & nutrients and to emulate the bodies of poverty stricken, malnutrised Third World women and that this body shape is seen as desirable.  It's almost as we, as a society, are punishing women as a whole, for something.  Being too successful, maybe?

Posted by Beautiful Things - Cathy at 09:07 No comments:

'How to be Adored' - review

I was initially a little sceptical about this book.  The title struck me as one of those ghastly please-like-me-I'm-quite-nice-really self help books.

Ignore the title.  It's actually a rather wonderful lifestyle guide. The premise is how to be a sophisticated woman, loved by all. Advice is based on tips and techniques from famous women of the stage & screen, both past and present, who've been adored by millions.  Topics range from make-up to relationships.

The book is full of laugh out loud pearls of wisdom from the author;

'Don't wear Uggs, have platinum blonde hair extensions, use lipliner and carry a chihuahua - this is the working wardrobe of the Wannabe Wag and best avoided if you have any kind of I.Q.'

'NEVER date a footballer, they may be as rich as Croesus but they will make you look cheap'.

Fantastic stuff.  It's a real tonic in today's shallow, celebrity obsessed world where knickerless girls falling out of cars are held up as role models.

Posted by Beautiful Things - Cathy at 13:57 No comments:

Today is NOT the most depressing day of the year.

According to those who know, today - 25 January - is the most depressing day of the year.  Apparently this is because the memories of Christmas have faded, summer is still a long way away and we're all buckling under the weight of the incoming bills.

Well, I beg to differ...  I had quite a good day today.  I got £15 pounds off my phone bill ( it's always worth asking!) and the man in the corner shop gave me £1 off because he didn't have enough change.  Not only that I had a great chat with my wonderful friend T.D. who always cheers me up.

In celebration of such a great day, I wanted to share this photo with you.   I took it a couple of days ago in my local park. 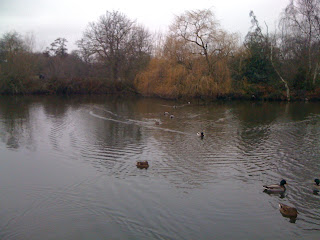 I've always believed that you should be there for your friends, no matter what, even if this means crossing town at 4am to be by their side in times of crisis.


So it's a nasty shock to find that people, who you consider friends, wouldn't do the same for you.


I've been friends with J.W. for some years now.  I've always known that she's quite controlling and self - absorbed but I brushed it aside because she's fun, I like her and we have a lot of common interests.


Long ago I'd accepted that things were always going to be her way.  For instance, I go to all her plays, (she's a writer) but the one time I had a short film in a festival, she didn't bother to turn up, saying that she had a headache.  Yes, it did bother me but I believe that you should accept people as they are or not at all, so I just accepted it.


Now I'm in a very bad way financially.  We're talking begging-for-crisis-loans-from-the-government-in-order-to-eat bad.  Before Christmas, I realized that I had no money to pay for Christmas so I asked J.W. if I could borrow £50.   I had no money to pay for the bus fare to go over to her place so I asked if she could drive over to mine.   I just assumed that this would come under the normal give and take of friendship - I'd certainly do it for her if the situations were reversed.  Various friends of mine owe me in the region of £100 and I've leant it to them gladly because they're my friends and I love them.  I'll never ask them for it back.


She drove over with the £50 but I've just received a phone call from her telling me that she thinks that I'm a very selfish person and I 'lack self-awareness' for asking her to drive over in the middle of the night before Christmas to 'deliver money'.


Before you ask, I've repaid £20 of the loan but I can't yet afford to repay the rest because the phone company's threatening to send around the bailiffs.

Email ThisBlogThis!Share to TwitterShare to FacebookShare to Pinterest
Labels: Life

Things to do before I die.

The older I get, the more I feel my encroaching mortality so I've making a mental list of things I want to do. Clearly some of these goals are easier to achieve than others.

I'm going to save this list to remind myself.

I'll let you know if & when I've achieved a goal.

The current obsession with Katie Price never fails to amaze me. Correct me if I'm wrong but all I see is a hard faced, self absorbed woman with very little discernible talent, who has no idea how to dress or apply make - up. Granted she has a remarkable business sense and a talent for selling herself but still...

And she's been voted 'One of the 50 most influential people of the decade'. God help us.

I have toaster envy

This is the world's first see through toaster. I really want one...

Posted by Beautiful Things - Cathy at 21:38 No comments: