The first thing I had to do was find out exactly what 'vivifying' actually meant.

According to my online searches, this means to 'give or bring life to' or 'endow with life'.  Interesting claim for a face cream to make.

The first thing I noticed was, how strong an odour it had.  I initially assumed it was camphor but camphor is not listed in the ingredients. The smell comes from a blend of lavender, geranium, rosemary, cypress and thyme essential oils.  It was so strong it actually made my eyes water slightly!  Seriously, pull back on the smells, Yon Ka.  Red watering eyes is not a good look.  And no, I didn't put it round the eye area.

Moving on from the overwhelming smell, it was very easy to apply. The texture is creamy and it absorbs quickly.  My incredibly parched complexion felt & looked fresh & rehydrated after just the first use.

And the firming bit?  It was difficult to tell.  I only had a small tester and I think things like that only become apparent after prolonged use.

My overall verdict is definitely meh.  The smell was overpowering.  The results were ok but I can get similar results without the watering eyes.
Posted by Beautiful Things - Cathy at 08:49 No comments:

We haven't seen a film in ages, mainly because there's so much rubbish out there, so The Dallas Buyers Club sounded intriguing.

It's the story of Ron Woodroof, (played by an almost unrecognisable Matthew McConaughey) a red neck, homophobic Texan electrician & rodeo guy who contracted HIV through intravenous drug use & unprotected sex with prostitutes.  He was given 30 days to live by the doctors.

At the time, mid 80's, AZT was the only known drug available for treating HIV positive patients and unfortunately it was still in the testing stages.  Ron refused to accept the prognosis and started learning about his condition as well as other treatments available in other countries. He was able to exploit a loophole in the law of the time which allowed terminally ill patients to import drugs from other countries and set up a buyers club.  This brought him into contact with a transvestite, Rayon - a fantastic performance by Jared Leto - with whom he forms a tentative and unlikely friendship.


Given the subject matter, it's actually quite an uplifting and even life affirming film.  Matthew McConaughey's intelligent, nervy performance makes the film.  If he doesn't win an Oscar for it, frankly there's no justice in the world.

It's by no means a perfect film.  It's very long and could easily have cut twenty minutes of unnecessary scenes.  Jennifer Garner as a sympathetic doctor was all cliche and surface which jarred against the moving performances from McConaughey & Leto.

Definite recommendation from me though if you want something a little different from the standard gaming inspired/rom com/action movie fare.
Posted by Beautiful Things - Cathy at 13:55 No comments:

Who was St. Valentine?

It has got me thinking though - who was St. Valentine and how did he get to give his name to such a commercial day?

It turns out that no one's quite sure who The Saint Valentine actually was.

There are two Valentines who were executed and subsequently martyred on February the 14th.  The first was a Roman priest who was imprisoned for marrying Christian couples and eventually beheaded on February 14th in either 269,270 or 273.

The second Valentine was the former Bishop of Terni, (a city in what is now Umbria) who was beaten and beheaded on February 14th 269 for trying to convert the Emperor Claudius to Christianity.

Ok, but how did the anniversary of such violent deaths become linked to a day for lurve?

It turns out that our old mate, Geoffrey Chaucer had a hand in this.  In 1381 he wrote a poem called 'Parlement of Foules', (The Parliment of Birds) where Saint Valentine's Day is mentioned as the day when all the birds choose their mates for the year.

"And in a launde upon a hil of flowres

Was set this noble goddesse Nature;

Of braunches were hir halles and hir bowres,

Ne was ther fowl that cometh of engendrure

That they ne were alle prest in hir presence


For this was on Saint Valentines day,

Whan every brid cometh there to chese his make"


A copy of the original poem is here and a modern translation here.

The idea of a special day devoted to love quickly caught on and before you know it, people were sending each other massive, luridly decorated, often padded cards declaring their feelings.

There is a story that the idea of Valentine's Day, as we celebrate it today, was started by Hallmark Cards to sell cards in that lull between Christmas and Easter but it's nothing more than an urban myth.  The introduction of the Penny Post in 1680 and cheap, mass produced cards meant that people have been expressing their desires via kitsch paper products for well over two hundred years.  Hallmark Cards was only started in 1910.

Personally, I'm ambivalent about Valentine's Day.  On one hand, I can't help feeling that if you need a themed meal and a cheap card to affirm your relationship, you're in trouble.  On the other hand, the romantic in me likes the idea of a day devoted to love.

Whether or not you celebrate Valentine's Day, just enjoy it and for god's sake, don't do as a friend of mine did last year - get drunk and post a series of self pitying posts on Facebook saying that no one's ever going to love you because you're too ugly.
Posted by Beautiful Things - Cathy at 13:16 2 comments:

I spoke here about receiving extra free samples at a promotional give-away.  The second sample I received was Matriskin Collagen Serum MP.


It claims to have 'a lifting effect without surgery' and blow me, it actually works!    I've reached that stage in life where I'm starting to look a bit like this so I'm very interested anything that will counteract it. After application you can actually feel the product tightening the skin. Following a week or so of use, my complexion was visibly less saggy and far clearer & healthy.  I received a lot of complements on how great I was looking.

One of the active ingredients is hyaluronic acid (hyaluronan) which is a component of human skin and is involved in tissue repair so I guess that's the anti aging bit of the formula.  The company has also run clinical trials on it's products, the results of which are published on it's website.  The nerdy part of me was impressed by this because there's a lot of smoke & mirrors and frankly down right deception in the cosmetics industry.

It's really easy to apply.  Just put about half a stopper's worth of product in the palms of your hands and smooth over the face.

The only problem is, it doesn't seem to be widely available in the UK. You can get samples through beauty box companies like Birchbox or on eBay but I couldn't find a UK website for it.  It's also eyewateringly expensive - $157 on the US site or €95 on the French site.  I'd buy it all the time if I could afford it but I think I'll have to restrain myself and use it only before big events.
Posted by Beautiful Things - Cathy at 09:27 2 comments:

Catching up and a trip up north

Well, that worked well, didn't it?  I promise to post a beauty review every Thursday and the very next Thursday, I go & miss it.

The truth is, I was up north, Newcastle way, visiting in-laws and I didn't want to haul my computer all the way across the country on the train. I haven't joined the 21st century yet and bought myself an iPad or tablet so unfortunately it was radio silence from me.

It was lovely being up north.  Newcastle is a beautiful city.  It reminds me of Scottish cities in a way - tall, grey stone buildings and clear, thin light. 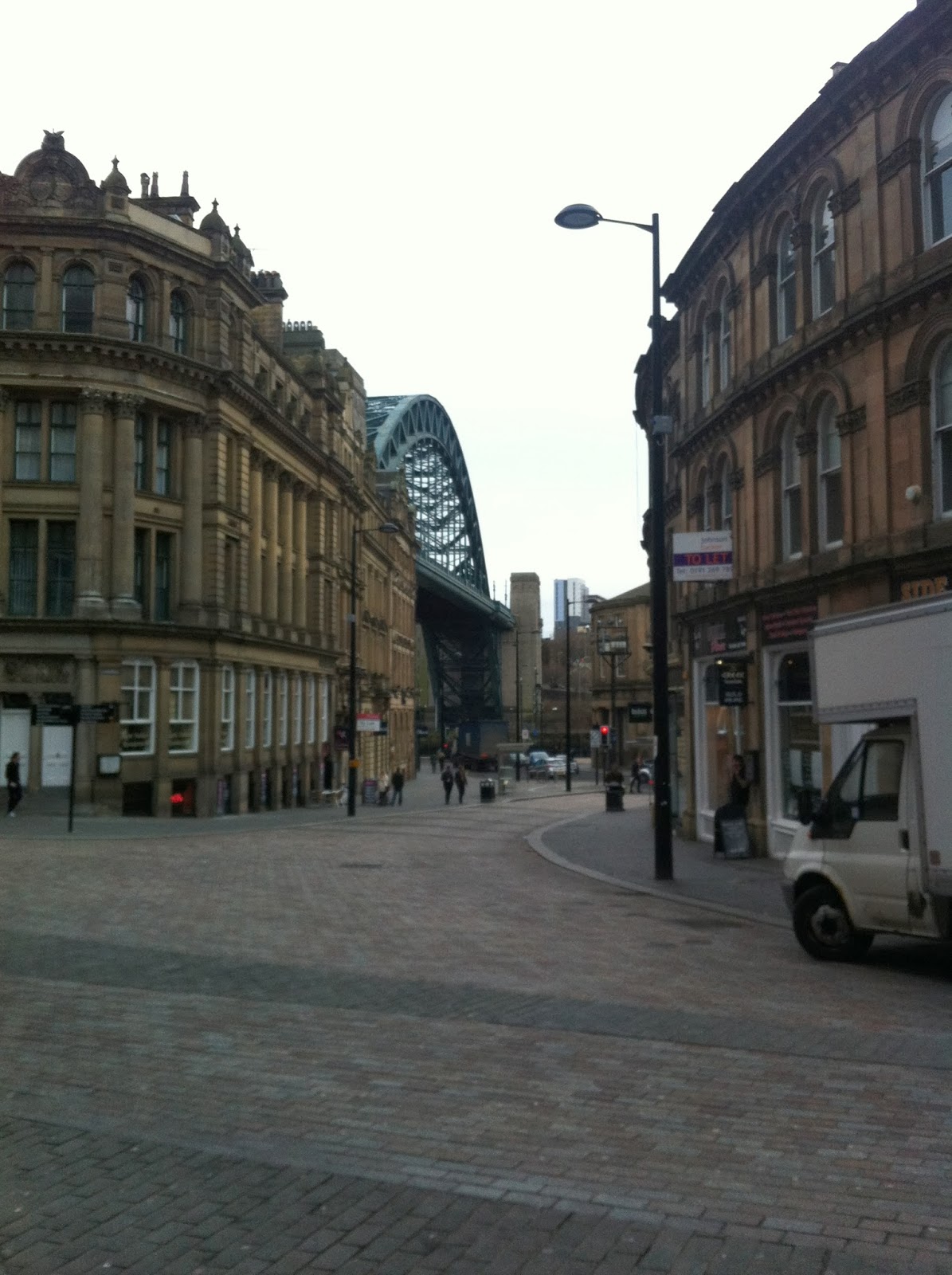 Whilst we were there, we did manage a visit to the Baltic Gallery.  The Baltic is similar in feel to the Tate Modern (but without the crowds). There were three exhibitions on - Thomas Bayrle, a German pop artist (good but derivative), Sara Barker & Ryder Architecture (over in a couple of minutes) and my favourite, Salla Tykka.  This was a series of short films exploring the nature of beauty and it was breathtakingly, well... beautiful.  There was a film about the blossoming of a giant water lily named after Queen Victoria; another about the Lipizzan horses, (you know - the ones which leap in the air and dance) and the final film was about a boarding school for trainee Romanian gymnasts. Well worth catching if you're in the area.  It is free to enter but we did leave a donation. 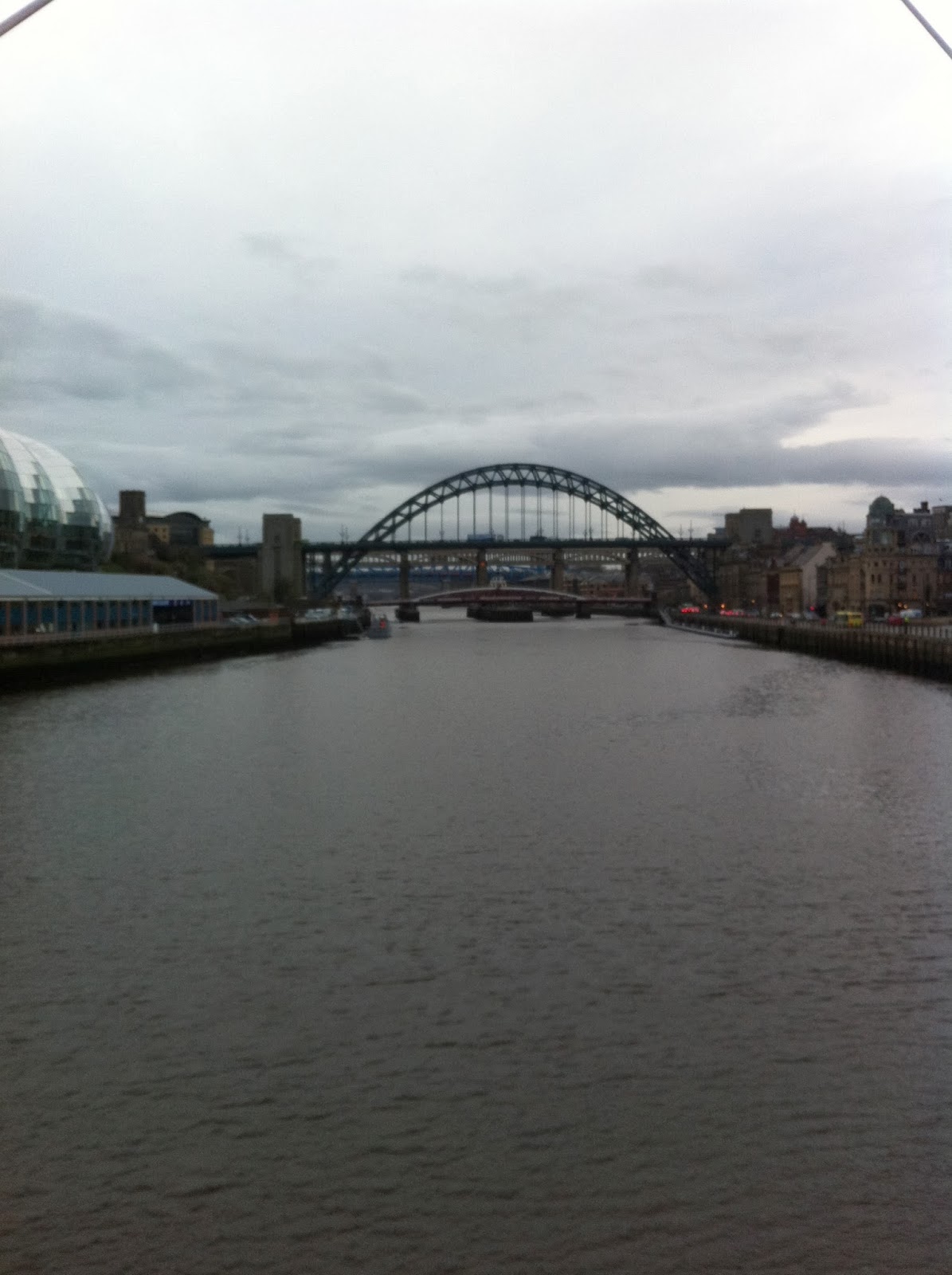 The view from the Baltic is amazing
Posted by Beautiful Things - Cathy at 11:34 No comments: