A lazy Sunday on the Southbank.

The weather has been topsy turvy recently so I was very glad that I'd booked tickets for a talk today with Victor Gregg, hosted by Rick Stroud.

Victor Gregg is a 92 year old ordinary Londoner who just happens to have led a most extraordinary life.  He joined the British Army at the age of 19 and was present at the Battle of El Alamein.  Victor volunteered for the Parachute Regiment after his experiences in north Africa.  After landing in eastern Germany, he was captured by the Nazis.  During his time as a prisoner of war, he was sent to Dresden.  Whilst he was in Dresden, the city was carpeted bombed by the British and Americans, (something which is now widely considered to be a war crime).  This event, in his own words, 'ruined his life for the next forty years' because nothing he'd experienced in the theatre of war prepared him for the horrors which he saw during this event.  He became a pacifist as a result and ultimately joined the Communist Party.

After the war he became a painter and decorator and ironically helped to build the Southbank Centre where today's talk was held.  Becoming tired of this he got a job as a driver for the head of a large Soviet bank in London.  This was of course, during the Cold War, and he was approached by British military intelligence to become an agent which he did.  He was a keen motor cyclist & attended many motor cycle rallies behind the Iron Curtain.  It was during one of these rallies that he accidentally bumped into the German officer who'd arrested him in eastern Germany and they became friends.  He spent a lot of time in Hungary and became one of the first people to physically cut the barbed wire that served as the Iron Curtain.

Phew!  Did you get all that?

He was a likeable old man with a very salty, particularly London turn of phrase that I found very endearing - describing the operation that ultimately lead to his capture as a prisoner of war, 'It was a cock up.  A complete balls up.  Them officers didn't know what the b****y hell they were doing.'

By the time the talk had ended, the weather had taken a turn for the better so I decided to take a wander along the Southbank.  Monstrous concrete architecture aside, it's one of my favourite parts of London.

I love the weekend book market underneath the railway arches. 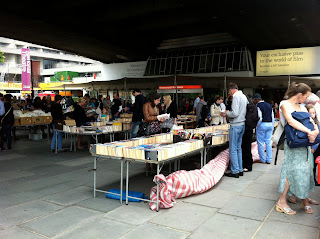 I once found a 1902 edition of Thomas de Quincy's 'Confessions of an English Opium Eater' there for £10.
And then there's the graffitied arches below the Southbank where skateboarders gather to show off their skills... 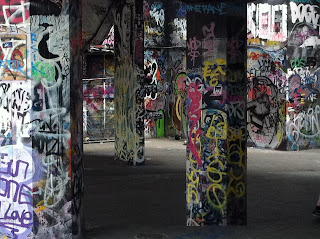 I tried very hard to capture the boarders in motion but they were just too fast for me.
I was surprised and bemused by the graffiti artists' unexpected social statements... 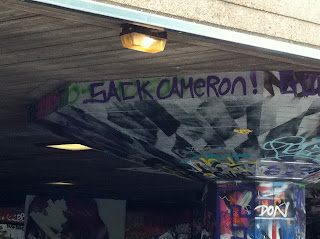 There was a food market on. 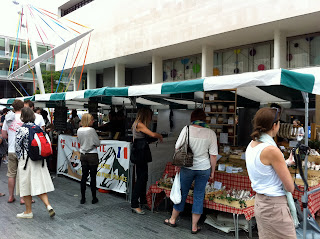 It's safe to say that I'm addicted to food markets.
I had a wonderful hog roast and apple sauce sandwich followed by the most delicious chocolate brownie I have ever had.  Sitting in the sun eating good food makes me very happy.
It really was a perfect day.  What's your ideal way to spend a Sunday?
Posted by Beautiful Things - Cathy at 19:40 4 comments:

My return. With broadband.

I'm back!  And I have broadband.


Following the advice of friends, I switched my broadband account from the Post Office, (which was dreadful) to Plusnet which, so far has been very good.  The signal has been consistently strong & fast and I haven't lost it once which was a real problem with the Post Office.  Plusnet customer service has been excellent, with emails at every step informing me of what's happening with my account.


A very big thumbs up from me.
Posted by Beautiful Things - Cathy at 18:38 No comments: