Apologies for the unexpected break in blogging.  Things have been moving at a rather unexpected pace chez moi.


The most exciting thing is, I'm actually getting some work in!  On Sunday I'm going to be making my first horror film. And no, I will not, as some of my friends have suggested, be the subject of said film.  I will be employed on the technical side.  It's only for one day but I'm very excited. I'll let you know how it goes.


So celebrate such great news, I'd like to share a photo I took some days ago.  It's nothing to do with work or films or horror, it was a sign outside a sandwich shop that made me laugh. 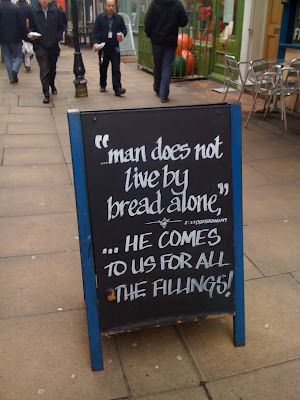 I've always believed that no matter how bad a relationship is, you can always learn something positive.  This is what ex boyfriends have taught me...


A really handy shortcut through Victoria Station.  I still use it to this day.


How to break into any council flat in central London.  Hey, I was going through my bad boy phase.  I didn't actually do any house breaking, I just know how to.


Wash up the cooking utensils while the meal is cooking. That way, you just have to wash up the plates and cutlery at the end. Unfortunately, this tip was the only positive thing I got out of that particular relationship because he slept with my friend.


Most importantly of all, never ever go back.
Posted by Beautiful Things - Cathy at 10:03 No comments:

Soundtrack to a life

I love music. My music of choice tends to be heavy metal and hard rock but sometimes, I'm slightly embarrassed to admit, I create a soundtrack, of sorts, to my life out of some slightly naff music.
When I'm waiting at the tube station to go to a job or an evening out I always find myself playing...

It's such an upbeat song and the chorus will stick in my head for the rest of the day.  How can you fail to have a good job/interview etc when you're humming 'Tonight's gonna be a good night'?  They did a version with the line 'Today's gonna be a good day' for Oprah's show in Chicago but unfortunately it's not available for download.


Yesterday I had to go to Warwick Avenue for a job interview so I just had to play Duffy's 'Warwick Avenue'...  whilst I was walking through the tube station.

I love the energy of metal, so the perfect song when I'm angry is...

You can work out for yourself when I play this...
Posted by Beautiful Things - Cathy at 17:00 2 comments:

The genius of Alexander McQueen

Picture from telegraph.co.uk
A talent like that of Alexander McQueen only comes along once in a while.  R.I.P.
Posted by Beautiful Things - Cathy at 09:40 1 comment:

I did a temp job yesterday, answering telephones for a small electrical company.


As the day wore on, it became obvious that the previous long-term temp had been driven from her job by bullying. To make things worse, my boss for the day, (let's call her Sharon), expected me to join in bitching about the previous temp, (who we'll call Melissa).  I was expected to be outraged that Melissa had had time off because her son was ill; taken an hour for lunch, (as a temp, you're not paid for your breaks), and phoned the agency first to let them know she couldn't come in (it's part of the contract with the temp agency).  Luckily I'd never met Melissa so I could smile and say vaguely, 'I couldn't really say, I don't know her...'  I was well aware that the next day I'd become 'that stuck up bitch from the agency' in Sharon's lore but I didn't really care - not much anyway.


Bullying was part of the corporate culture at that firm. Sharon had made a mistake on some invoice and her boss gave her a very public dressing down in the office in front of me.  It was so embarrassing.  I'm certainly not advocating that she shouldn't have been pulled up about it but I think that the professional thing to do would have been for her boss to take her into his office, close the door and talk to her in private.


I was in two minds whether to mention the situation to the temp controller at the agency.  In the end, I didn't say anything on the grounds that I should only concern myself with my immediate job.


I've always made a concerted effort to stay out of office politics, where ever I've worked.  I find office politics to be a pointless waste of time and a sign that people just don't have enough to do in their day.
Posted by Beautiful Things - Cathy at 08:20 No comments:

You'd have to been living under a stone this past week to have missed the uproar, here in Britain, over John Terry, the England football captain's private life.  For those not in the know, John Terry is a married man with two young twins, who had an affair with a French lingerie model.  The news of this affair hit the tabloids and he was sacked from his post as England captain in response to media pressure.

I think that this was an appalling move by Fabio Cappello, the manager of the England squad.  Don't get me wrong, I think that John Terry has behaved despicably.  The problem I have is, the way you conduct your private life should not determine whether or not you keep your job.  It may seem like a celebrity matter and nothing to do with real life but these things have a nasty habit of filtering down into the mainstream.  Before you know it, ordinary people will find themselves loosing their jobs for private indiscretions. Contrary to public opinion, people with squeaky clean personal lives aren't necessarily the best at their jobs.  In today's sanctimonious climate, Winston Churchill would certainly have had to resign because of his heavy drinking. Yes, you could argue that Terry is a bad role model for young boys but my argument is that if the media hadn't pried into his private life, it would have remained exactly that - private.  What we have here is a situation of the media feeding on itself.  My grandma taught me that you should never gossip about someone's personal life and yet today, we have a massive industry built around gossiping about the private lives of people in the public eye.


John Terry was one of the best England captains of all time - far better than the sacred David Beckham.  He should be allowed to continue.
Posted by Beautiful Things - Cathy at 08:28 1 comment:

I've always been rubbish at dating.  Some women seem to have the magic touch - a friend of mine was asked out on a date whilst she was waiting at a pedestrian crossing for the lights to change. Fat chance of that ever happening to me! I'm the girl who's elbowed aside in everyone's rush to reach the other side.


I was in primary school when I had my first crush.  His name was Louis.  To my eight year old eyes, he was the most beautiful thing I'd ever seen - dark brown eyes, wavy black hair, olive skin and most importantly, he had a GI Joe doll.  I got the idea from somewhere that the best way of letting him know that I liked him, was to look at him a lot and somehow he'd just know that we were meant to be together and spend the rest of our lives together making mud pies and tormenting my brothers.  So I did. Look at him a lot, that is.  In art lessons, I'd smile at him across the table and forget to do my work.  In maths lessons, I'd glance at him a lot hoping that the intensity of my feelings could be conveyed by telekinesis and that he'd send the answer to the complicated equations back in gratitude.


So did my clever plan work?  Did Louis fall in love with me? Well, no, not really.  Louis told the teacher that I was a stupid girl who kept glaring at him and frowning and he couldn't think about his work because he thought I was going to hit him.  I was moved to a different seat across the classroom and told to stop bothering him.  So ended my first great love.


Things have continued in the same vein ever since.
Posted by Beautiful Things - Cathy at 10:04 1 comment:

I have a slight obsession with the smell of things.

I'm transfixed by the power of the faintest whiff of a scent to evoke long forgotten memories.  There's a cologne that an old boyfriend of mine used to wear.  I have no idea what it is but sometimes a man will pass me in the street wearing it.  My heart will start pounding and instantly I'm back in Lyons in the summer of 2003.  Occasionally I've tried to find out what it is - a fresh light fragrance that reminds me of seabreezes and blue summer skies - but I've never had any luck.  I think it's best to keep it unknown - a special, unique memory.


A friend of mine wore Christian Dior's Poison for a whole winter. It takes just a waft of that deep rich fragrance for me to want to see her again.  Funnily enough, when she changed to a Hermes perfume, it just didn't have the same effect.


And then there's the smell of Africa...  I grew up in Africa. The smell of rain on the drought parched, red soil is something I miss with a primal intensity.  I didn't think it was possible to miss the smell of something but there you go.


The power of perfume is why I love the idea of a signature scent. Something that is 'you'.  I wore Estee Lauder's 'Body Power' for ages.  I adored its creamy, fresh fragrance but it's long been discontinued and I haven't been able to find anything really suitable since.  I'm currently wearing Hermes, 'Un Jardin en Mediteranee'.  It's fine but that's it. Fine.  It's got a harsh undertone which I'm not sure about but I've never smelt it on anyone else which is why I like it.


Sometimes location can trick you.  Recently, when I was in Paris, I bought L'Artisan Parfumeur's 'Fou d'Absinthe'. Standing in the dark panelled shop in the Third Arrondissement, I fell in love with it's deep woodiness and it's promise of dark exciting evenings to come but somehow, in London, it just doesn't seem the same. Here, in grey, sensible London, it just seems too... well... deep and I realized that the dark, romantic smell was the perfect accompaniment to the dark, romantic Parisian surroundings.


I'm trying to work out what the perfect London perfume would be. Someone suggested Burberry 'Brit' but that's a bit too obvious.  When I've sussed it, I'll let you know.
Posted by Beautiful Things - Cathy at 09:52 No comments: