Livingston - the next big thing?

Last night I worked on a Livingston gig.

They're what I can only describe as 'Emo rock' and boy, did they kick arse.  I'm extremely cynical about a lot of most of the acts that I work with.  When you do as many shows as I do, you get so tired of the generic sounds and looks but this lot were different.  Charismatic, energetic...
Take it from me, they're about to go HUGE.
Posted by Beautiful Things - Cathy at 00:42 No comments: Links to this post 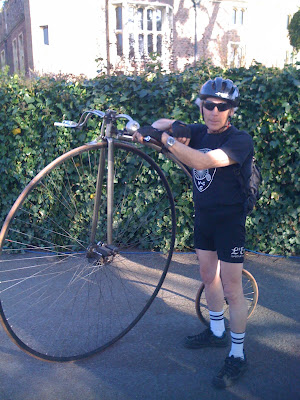 I saw this guy outside Hampton Court Palace on Saturday.
I'm not sure that I'd be comfortable cycling on something nearly as tall as myself and really hard to climb onto but I love the fact that people still ride them.  What was great was that he didn't belong to any enthusiasts club or anything - he was going for a cycle in the spring sunshine and his choice of transport just happened to be a Penny Farthing.
Posted by Beautiful Things - Cathy at 17:12 3 comments: Links to this post

Today, I've got this picture of Thomas More for you. Thomas More, for those who don't know, came up with the idea of 'Utopia' - an ideal state where men and women are educated alike, there's complete religious tolerance and communal ownership of land. Wishful thinking on his part because he was executed by King Henry VIII, (yup, the one with all those wives) for not agreeing that he, Henry VIII, was the supreme head of the Church of England.


Anyway, let's not think about his grisly end and contemplate, instead, the shiny golden glory of his statue and the possibilities of Utopia. 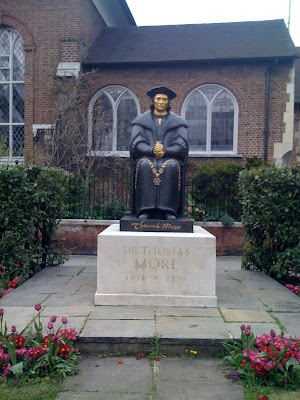 Posted by Beautiful Things - Cathy at 20:33 No comments: Links to this post

Email ThisBlogThis!Share to TwitterShare to FacebookShare to Pinterest
Labels: London

Choosing to live the so-called 'artistic' lifestyle invariably means that from time to time work is slow and you have to dip your toe into the pool of 'real' work or in my case, temping.  Usually the jobs are just boring but occasionally you get a real humdinger.


Many years ago, when I was young, scared and naive, I was sent as a receptionist to the London offices of a very well known credit card company.  I arrived at 9am on the dot and was shown into a tiny little office that was more like a broom cupboard, with no windows.  The phone contact list was thrown (literally) at me, I was given a cursory lesson on how the switchboard worked and left on my own to figure things out.  When I say, left on my own, I mean really left on my own.  Not one person came in to check that I was ok, whether I needed to go to the toilet, etc.  Now I get hypoglycemia and if I don't eat, my speech becomes slurred and I forget things.


At about 4.30pm (remember I started at 9am), a rather sour faced woman put her head around the door and looked at me disdainfully, "I've had complaints from customers that you are slurring.  Have you been drinking?"


"No, I'm so sorry.  I just really need a break.  I haven't eaten all day and I go a bit funny when I need food."  At the time, I didn't know that I was hypoglycemic.


The sour faced woman looked at me incredulously, as if I was something nasty that she'd stepped in, "This really is most inconvenient.  We're extremely busy here and no one has time to do your job for you whilst you put your feet up."  (By law everyone has to have a fifteen minute break every four hours.)


If I'd been older and wiser, at this point I'd have gathered up my things, informed her of my legal rights, threatened to report her and walked out but I was young and new to the world of work so I pleaded.  After a long moment during which she glared intently at me and I quailed under the onslaught, she begrudgingly agreed to give me a ten minute break.  Naturally she told me off for being late when I got back but ten minutes really isn't long enough to go to the toilet, find a sandwich shop, wait in line for the sandwich to be made and then eat the sandwich.


I did tell the temp agency about what happened but they said that the company had reported me for drinking on the job!!  The temp agency continued to employ me so I guess they believed me.


This incident pales into insignificance, however beside the story of working for the man who I now refer to as 'that nutter'.  The offices were in a basement off Oxford Street and again, I was employed as a receptionist.  As soon as I arrived, I had a bad feeling about the job.  There were stacks and stacks of paper and files everywhere.  You actually had to pick your way over them to the desk.  I asked for a pen and paper to take messages, write notes, etc and I was met with a look of incomprehension. Finally I was given a pencil and a piece of paper that the guy had in his bag.


The company was a computer sales company.  They advertised computing equipment for sale in computer magazines.  Customers called up or filled in the appropriate form (this was in the days before the internet), money was taken and the equipment duly dispatched.  Only that it wasn't.  As the day wore on, it became increasingly obvious that the company was taking money from the customers and not sending on the equipment.  Not only that, they'd recently closed down and opened up again under another name to avoid legal action.  Every single call was from irate customers threatening demanding their money back and threatening legal action.


Eventually I had a call from a man who said that he was trying to start up his own business but because of the money that he'd lost to this dodgy company, he was on the verge of going bankrupt.  I'd become very uncomfortable about playing even a small part in this fraud so I gave him all the details about the company that he needed to pursue legal action.


Almost immediately I heard the boss screaming down the phone at someone, "She's trying to destroy me!  I'm not going to let it happen!  I'll sue you!  I'll destroy her first!".  It really unnerved me.


The phone then rang and it was the temp agency.  All these years later, I can still remember what followed word for word, "You need to leave the office immediately.  We don't think it's safe for you to be there.  Pick up your things, don't stop to talk to anyone, just leave.  Once you've left, come into our offices immediately.  If you are not here in twenty minutes, we will be calling the police."  I was shaking so hard that I could hardly put the phone down properly.  I got my things, slipped out as quietly as I could and ran the whole length of Oxford Street.  It turned out that the temp agency had just had a call from the police regarding the ongoing fraud, then they'd received what they described as a 'deranged' phone call from him about me.  For years I avoided that particular spot on Oxford Street.  Even now, passing it gives me the chills.

Posted by Beautiful Things - Cathy at 21:36 4 comments: Links to this post

The tourist sites of London feel faintly familiar to most people, whether they've visited them or not. Image courtesy of planetware.com
London is at it's best, however, off the very well beaten tourist track.  I want to do an occasional series about the hidden corners of London.
I'm going to start with Battersea - the part just by Battersea Bridge, on the south side of the river.
This area was very heavily bombed by the Nazi bombers during World War 2, trying to get Battersea Power Station on the opposite side of the river.  They didn't hit it. 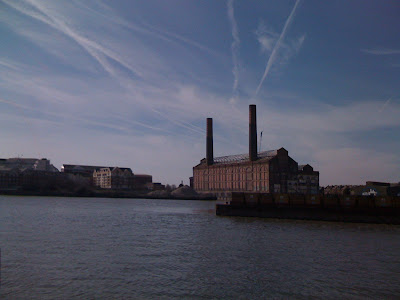 Battersea Power Station
Thanks to government re-building programmes up until the 1970's, the area is now largely made up of dreary council flats, light industrial sites and expensive, characterless new builds. 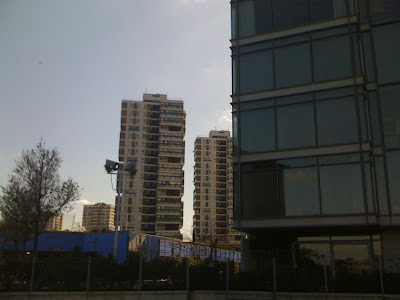 Thankfully, not everything was destroyed during the Blitz. The rather wonderful St. Mary's Church survived the conflagration.  There's been a church on this site since 693 AD.  William Blake was married here and Joseph Turner painted on this spot. 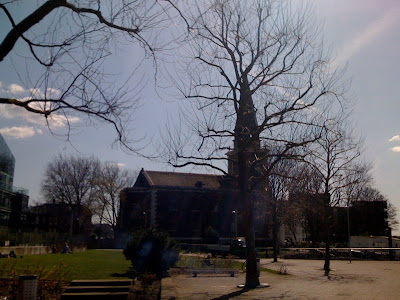 St. Mary's
I'm rather fond of this spot for a number of reasons.  Firstly, it's an oasis of calm in traffic bound hell of the area. Secondly, their admissions or rather, welcome policy is endearingly inclusive. 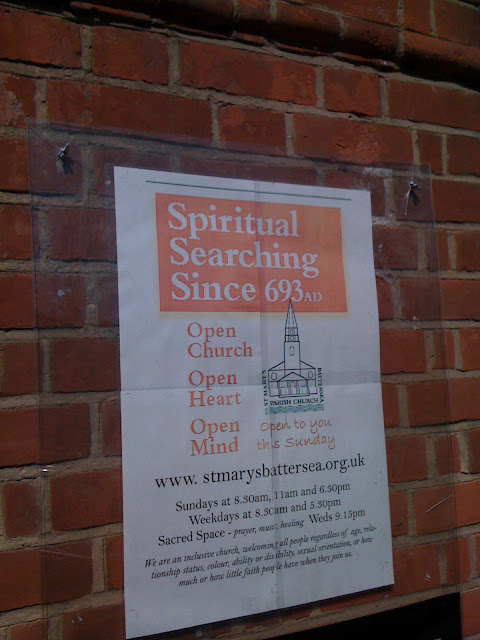 I don't know how well you can read this notice from my photo but it says that they welcome 'all people regardless of age, relationship status, colour, ability or disability, sexual orientation or how much or how little faith people have when they join us'.  Rather lovely, I think.
They also have a number of houseboats moored outside the church. 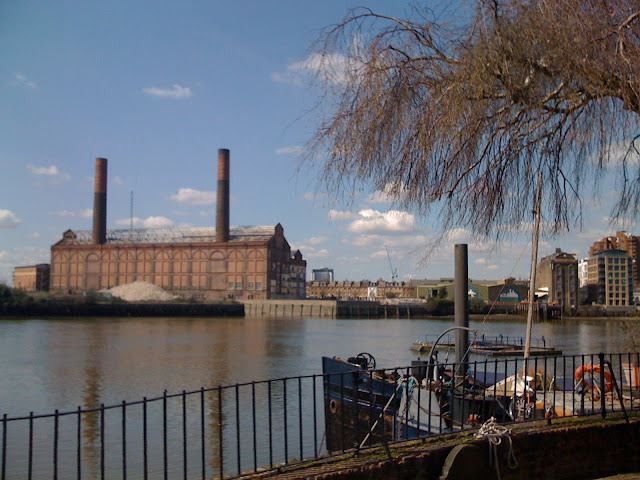 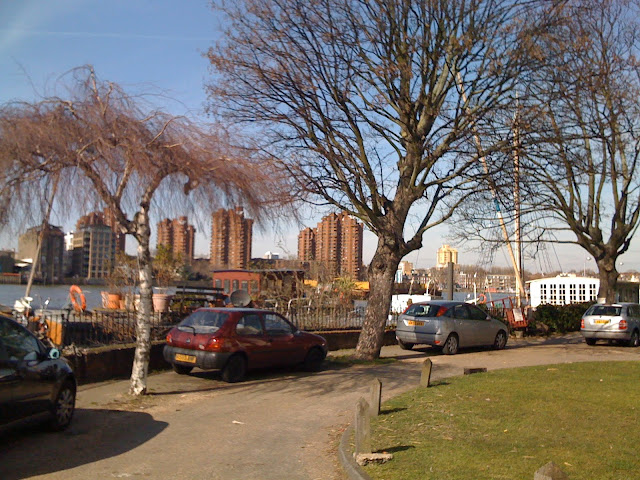 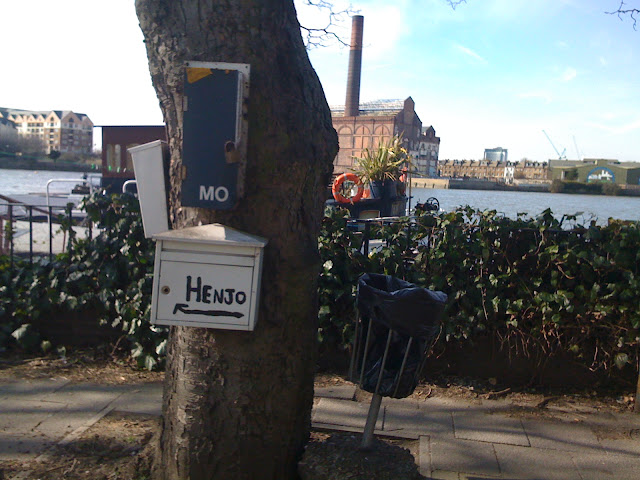 Battersea has always been an unusual area.  In 1913, Britain's first black mayor, John Archer was elected Mayor of Battersea.  It's one of those somewhat pragmatic areas with the super-rich living cheek-by-jowl with council estate tenants.  Definitely worth a visit if you want to experience another side of London.
Posted by Beautiful Things - Cathy at 21:01 1 comment: Links to this post