This year, however, I wanted to join in the fun and try my hand at carving a jack o'lantern out of a pumpkin.  When I mentioned this to my boyfriend he said that he was only going to carve a turnip because that's what they did up north (of England).  I'm afraid to say that I laughed at him.  I assumed that the only reason they carved turnips was poverty because turnips are so much cheaper than pumpkins.


Well, it turns out that the last laugh was on me.  It turns out that the carving of turnips for Halloween or All Saints Eve is a very ancient Celtic tradition dating back pre Christ. According to Wikipedia, Samhain was the final harvest of the Celtic year, falling on October 31st.


It was believed that at Samhain, the wall between the living and the spiritual world was very thin, allowing evil spirits to cross into the world of the living.  Faces were carved out of turnips and lit with embers from the fire to confuse the evil spirits and prevent them from entering the dwelling. Image is from Wikipedia.  This shows a traditional Irish carved turnip from the Museum of Country Life in Ireland.
With the arrival of Christianity, Samhain became All Hallows Eve but many of the traditions remained.  When the Irish settlers went to north America, they took their traditions with them but turnips weren't, as yet, readily available so they choose the next best thing - pumpkins, which grew locally.  Pumpkins are bigger and far, far easier to carve so began the tradition of pumpkin carving.
Anyway, here are our efforts... 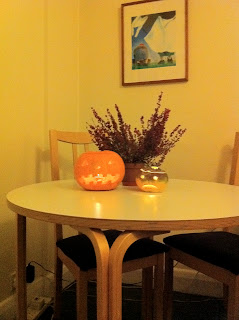 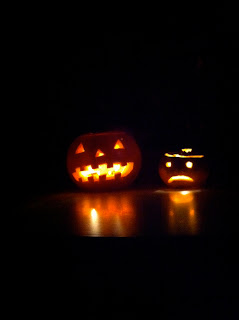 I was rather pleased with the results.  A nice mixture of old and new, I felt.
Posted by Beautiful Things - Cathy at 08:09 No comments: Links to this post

Email ThisBlogThis!Share to TwitterShare to FacebookShare to Pinterest
Labels: Life

I have a very spotty forehead.  It's actually quite disgusting.  When I was handed a few tubes of Eau Thermale Avene's Cleanance K Cream-gel as a free gift, I thought I'd use it on my forehead as an exfoliator.
After all it says 'exfoliating, hydrating' on the packaging.


The first use was rather disappointing.  The product didn't contain any of the granules that you'd expect with an exfoliant.  It didn't leave my skin feeling smooth to the touch as per normal after using a scrub.  My forehead just felt slightly warm.

But I kept using it for some reason and it became part of my routine.  After about a month I noticed that my forehead was significantly less spotty.  Like about 70% less spotty.  In my books that's a major result.

I think that calling it an exfoliant is a misnomer because it actually contains AHA's and BHA's which have a gentle peeling effect on the skin.

*Update 1/1/12*
I ran out of the tester so stopped using Cleanance K for a bit and the spots on my forehead came back with a vengeance.  Once I started using it again, they disappeared after about a week.

I've also found it's quite useful if you get a single spot, just apply it to the spot and it dries up nicely.  Be careful though not to get it on to the surrounding skin.  I have sensitive skin and I got a zinger of a spot on my face.  The Cleanance K worked very well helping to reduce it but if any of the Cleanance K touched (the non spot) part of my face, it really stung.  A cotton bud worked well for applying it.

As I said before, I don't know why it's called an exfoliant.  Just ignore that bit.  Apply it to the areas you need, rub it in and leave it.  The instructions say to use once a day but I found that twice a day was good for me.  I have dry, sensitive skin with oily areas that are prone to spots and blackheads.  I had no problems at all using it on the oily areas.

Posted by Beautiful Things - Cathy at 23:25 6 comments: Links to this post

Hearing Dogs for the Deaf

I'd like to share an amazing charity with you - Hearing Dogs for Deaf People.  I only came across them recently and I think they're wonderful.


I'd heard of guide dogs for the blind but I didn't realise that dogs can be trained to provide similar services for the deaf and disabled.  There are a lot of incredible stories about how these dogs had literally saved lives.  One that particularly stuck in my mind was about a woman with a crippling condition of which deafness was one of the symptoms, (I can't remember the name of the condition).  She was struck by a stroke one day and just before she passed out she managed to press the alarm button in her home to alert the emergency services.  Her hearing dog nudged her into the recovery position!  When the emergency services arrived, her dog led them directly to her.  If her dog hadn't put her in the recovery position, she would have died.


These dogs provide independence, companionship & security for some very vulnerable people.  Just to add to the wonderfulness of it all, the dogs are rescue dogs.  Yea, the dogs are rescued from neglectful or abusive positions and trained to be hearing dogs.  So everyone wins.


I know that money's tight for everyone at the moment but if you do have a little to spare, they're definitely a charity worth donating to.
Posted by Beautiful Things - Cathy at 22:57 1 comment: Links to this post

When will this recession end?

You know when you're just so angry with the world that you don't actually know what to do?

I received a letter from one of my clients this morning asking me to accept a CVA.  A CVA is a Company Voluntary Agreement - a company realises that they're in trouble and asks their debtors to agree to a repayment schedule.  Except in this case they're asking me to accept 30%, yup, that's thirty percent of the money they owe me, repaid over 6 months.  That will work out at a grand sum of about £20 a month.  I'm the only private individual on the list - all the rest of the debtors are big companies.  A company is in a much better position to absorb losses than a person.  The person who introduced me to the company has been paid in full (and isn't answering my phone calls).

Note to self - follow your instincts.  If it feels wrong, it usually is.
Posted by Beautiful Things - Cathy at 16:06 No comments: Links to this post

One of the many things I love about living in London is finding the abandoned relics of a bygone age standing forgotten and un-noticed in the urban landscape.

This is just outside Clapham Common tube station. 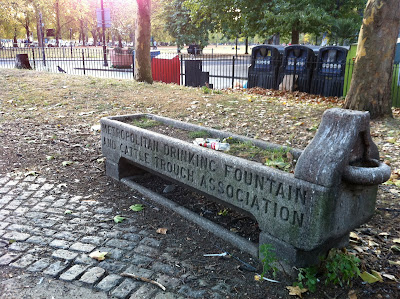 A quick internet search reveals that, during the 19th century, clean safe free drinking water for all was very scare.  The Metropolitan Free Drinking Fountain was set up in 1859 to provide free drinking water for London's general populace.  The foundation set up drinking fountains and troughs like this all over London which immediately became not only very popular but vital for a healthy population.  As the infrastructure increased and drinking water became available inside the home, these fountains fell into disuse.
As for me, I wish there were still horses and cattle in London to stop and take a long cool drink at troughs like these.
Posted by Beautiful Things - Cathy at 22:15 2 comments: Links to this post

"Midnight in Paris" - a review.

Things haven't been going that well recently and I've been in a bit of a slump so I decided to indulge in unabashed escapism & see the new Woody Allen film, 'Midnight in Paris'.

I've always been in two minds about Woody Allen.  He's invariably struck me as rambling & self-indulgent but Paris is one of my best loved cities in the world and the luminous Marion Cotillard, who's one of the stars, is my favourite actress so I decided to give the film a go.

It turned out to be a very good decision on my part - 'Midnight in Paris' is wonderful.

To summarise briefly, it's about Gil, an American writer played by Owen Wilson, visiting Paris with his fiancee Inez, played perfectly by Rachel McAdams, and her very Republican parents.  Gil is a romanticist, a dreamer who'd love to move to Paris & write a novel whilst Inez is more self absorbed & dreams of owning €18,000.00 antique chairs to put in a brand new Malibu beach house.  It's obvious from the start that they're completely unsuited but they stumble along unhappily.

One night Gil decides to take a walk through the streets of Paris on his own.  He's picked up by an antique taxi and transported back to a time he's always dreamed about, the golden age of Paris, the Jazz Age, where amongst many people, he encounters his idols Scott & Zelda Fitzgerald, Ernest Hemingway, Picasso, Dali and Gertrude Stein who gives him advice on his novel.  Most importantly of all he meets Adriana, (Marion Cotillard) the *fictional* lover of Picasso.  She's a dreamer too who yearns for La Belle Epoque.  I know the time travel aspect sounds dubious but it's testament to Woody Allen's skill as a film maker that, not only does it work, but he subtly suggests it's a manifestation of Gil's unhappiness as he tries to work out a solution to his problems.

There was also a great cameo by Carla Bruni, Sarkozy's missus and the first lady of France.

I won't say too much more about the plot because I wouldn't want ruin the film for you but the film left me on a high.  It's about the nature of love, about nostalgia, about yearning for something better.

The clothes, both in the present day and in the 1920's were breathtaking. 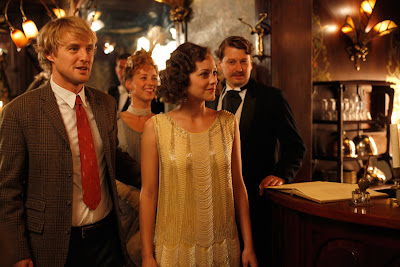 Image from http://www.style-extraordinaire.com/2011/06/midnight-in-paris.html
At times I found my breath catching at the exquisite detail on the 1920's clothing.
In many ways though, Paris was the real star of the show.  It was clearly the Paris that only really exists in tourist brochures but no matter, it was beautifully & sumptuously shot and left my heart singing at the sheer beauty of it all.  Shots of grim banlieues would clearly have just ruined it.
After the film, I walked back through the park and watched the sunset.  A perfect end to a perfect afternoon. 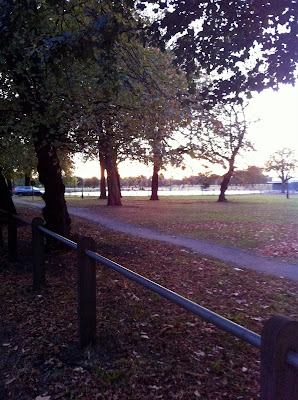 You can't really see the sunset in this picture because my iPhone couldn't quite capture it.
Posted by Beautiful Things - Cathy at 13:42 1 comment: Links to this post

I know.  I haven't posted in ages.  It's been a combination of things; (paid) work, illness (nothing too serious), but mainly a feeling that blogging is difficult.

Obviously, I want to write the best possible posts.  Witty, entertaining, personal.  My favourite blogs are like that.  I love reading them because they bring a different dimension to the way I look at things, they entertain me and they're thought provoking.  I've written drafts for posts but haven't posted them because I just feel that they don't live up to those standards.

Must try harder...
Posted by Beautiful Things - Cathy at 14:32 3 comments: Links to this post