I've reached that age where everything is starting to head southwards, so I'm always on the look out for products which address the problem.  When Weleda's Pomegranate Firming Night Cream and Pomegranate Serum arrived in my Latest in Beauty box, I was keen to try them.

I started with the serum.

It had a light, pleasant texture and was easy to apply.  Immediately I could feel a tightening effect as the serum dried.  After a couple of days, it did seem to me that my skin was a little more taut and I think over time the effects would be more noticeable but I only had a 7ml tester.

Then I went on to the night cream.

I was far less happy with this.  The texture was far too rich, even for my dry skin and I ended up with a breakout of spots.  The smell was overwhelming and my boyfriend called it 'revolting'.

In the UK, the range can be bought at http://www.weleda.co.uk.  I couldn't find anywhere that sold it in the US.
Posted by Beautiful Things - Cathy at 17:15 1 comment: Links to this post

London, women and the Olympics

Before the Olympics started, I was this Londoner - grumpy and dreading the impact it would have on our over-burdened, creaky transport system.  But I loved the games and ended up watching more sport in the last two weeks than the rest of my life put together.  I've even become an armchair expert in a number of sports which previously I was unaware of.  So what happened?

I think the change started with the Opening Ceremony.  I knew a number of people working on it, so I watched the show from start to finish.  And what fun it was!  I just adored the extravagant, joyful silliness of it all - the Industrial Revolution set in Hobbit land; tributes to the NHS AND the victims of the July 7 bombings; British music; Mr Bean and the Queen parachuting all in one show, not to mention that magnificent Olympic Flame sculpture.  I was so, so proud of all my friends on it.  I know how much hard work they'd put into it and it went off absolutely flawlessly.  Whisper - I even had a swell of patriotic pride.

London really stepped up to the mark.  The whole city really did look its best, everyone was happy and cheerful and for the most part, the transport worked well.

And then of course there're the athletes.  There's something compelling about watching human beings at the height of their abilities push themselves to the limit.  I loved Jessica Ennis's win as well as Mo Farah's runs.  Not forgetting Usain Bolt's astonishing victories.  And as for Nicola Adams - wow!  The first woman to win the first Olympic women's boxing tournament.

One of the things that's really impressed me is how generous and gracious both the winners and the losers were.  Every person has acknowledged the debt they owe to the people around them - coaches, family and friends and everyone has paid tribute to their fellow athletes.  The losers have so often apologised for letting people down which, I initially found very strange, but when I thought about it, I realised what a brave, big hearted thing to do it is.  It's about accepting the responsibility for failure fairly and squarely, without blaming anyone.  Such a contrast to the selfish, petulant, 'Me first, nothing's my fault' culture that prevails today, especially amongst overpaid footballers.

In many ways it was the women's games.  Women were competing for the first time from Saudi Arabia, Afghanistan and Palestine.  Women's boxing was an Olympic sport for the first time.  Finally, it really felt that women's sport, (and by association women in general) was really considered equal to men's.  A rather sexist colleague of mine, who made it clear before the games started that he regarded women's sport as nothing but something to keep the girlies happy whilst the men got on with the serious stuff, became an ardent supporter of the British Judo medallist Gemma Gibbons.  He bored everyone with the information that 'she'd won with a broken thumb, y'know' until we had to tell him to shut up.

Finally, an open plea to all editors - I'd really like to see more women like this in my magazines.  Beautiful women with strong, powerful bodies who've achieved incredible things.  Not vacuous, emaciated, media hungry idiots like the Kardashians et al who've never achieved anything worthwhile in their lives. 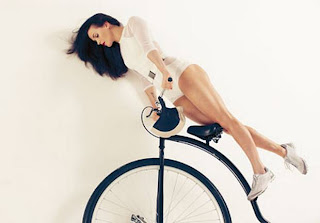 Posted by Beautiful Things - Cathy at 20:56 2 comments: Links to this post