As you grow older everything starts to sag and crease.
I've noticed recently that my neck was starting to resemble this, so I was on the look out for a good neck cream.  I've always liked the organic ethos as well as the gorgeous smells of Neal's Yard Remedies, so when I spotted the Rejuvenating Frankincence Firming Neck Cream, I decided to give it a try.

Image via http://www.shopperhive.co.uk/
My first impression?  It smelt gorgeous!
I applied it to the neck and decollectage region twice a day and after about two weeks, I started to notice a difference.  I'm forty five so sadly my complexion will never look like this but there was a noticeable increase in hydration and a slight increase in firmness.  At my age, even a slight increase is good enough for me!
Buy here for £38.80 and in the USA here for $65.
Posted by Beautiful Things - Cathy at 13:26 1 comment: Links to this post

Email ThisBlogThis!Share to TwitterShare to FacebookShare to Pinterest
Labels: beauty

The Royal Wedding - A Londoner's perspective

I do love a good wedding.  I love the romance, the chance for a good knees up, the general loveliness of it all.  So I was rather excited about the Royal Wedding.


Most Londoners, myself included, steer well of central London during major events but I was rather touched by the response of ordinary Londoners, far away from the media glare, to the wedding...  My local shisha bar offering free shishas to anyone called William or Kate; the Caribbean restaurant just down the road inventing a plethora of new cocktails for the occasion including 'Kiss me Kate' and my personal favourite, 'Westminster Sinner'; the phalanx of little girls walking regally down the High Road dressed as princesses, complete with tiaras.


My flatmate and myself decided to mark the occasion by dressing in our poshest frocks, drinking Earl Grey tea from a beautiful hand painted tea set left to me by my mum and eating Victoria Sponge cake whilst we watched it all unfold on the BBC.  Darling, how very British! 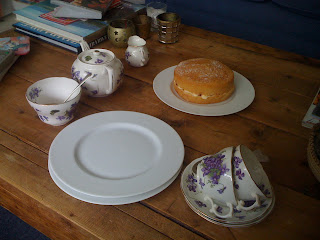 The moment which really brought the enormity of the occasion home to me was, when they kissed on the balcony at the palace, we could actually hear the roar of the crowd. I only live about five or six miles away from central London and I think the wind must have been right.  Most astonishing.
I'm not going to add anything more to the online cacophony about The Dress, The Kiss and The Body Language because far, far more knowledgeable, experienced people than myself have already analyzed them so all I will say is, I thought Kate looked beautiful - classic and timeless - and I think that they're genuinely in love.  I was rather touched by William's protective body language towards her throughout the ceremony.
Amongst all the excitement and romance, I couldn't, however, help feeling a sense of unease at such a display. So much (taxpayer's) money spent, yet I was still stepping over homeless people on The Strand on my way to work. The Strand is about quarter of a mile from Westminster Abbey.  I do realise that  social problems like homelessness are far more complex to solve than just throwing money at them but still...
Posted by Beautiful Things - Cathy at 13:00 No comments: Links to this post